You have no items in your shopping cart.

Potatoes are hugely versatile and are a staple ingredient of many meals in one form or another - boiled, mashed, chipped, roasted or baked. Freshly dug and lightly boiled with mint; or cooled and eaten with salads; or mashed with mustard or horseradish they just can't be beaten. Potatoes are also one of the most satisfying vegetables to grow. And harvesting time is what makes the potato really special, nothing beats when those delicious tubers are finally lifted up from the soil like buried nuggets of gold. Garden-grown potatoes are really something else! So if you’ve never tried growing them before, make this the year you do.

Here is our planting to harvest guide to potatoes, and thanks to our friends over at Grow Veg who have created a great video to accompany this article:

Before you plant you need to decide what type of potato you need. There are two main types of potato: maincrops and earlies.

Maincrop varieties are usually bulkier and give a bigger harvest, and many can be stored for winter use. Maincrops are typically harvested in late summer or autumn.

Early varieties are ready from early to midsummer and are further divided into first earlies and second earlies. First early varieties are first to crop, while second earlies follow on a few weeks later. Early potatoes tend to be smaller than maincrop types, but they have arguably the best flavour and often have a smoother, waxier texture that makes them perfect in salads. They’re also sublime when served steaming hot, finished with a drizzle of olive oil and a scattering of herbs.

Check variety descriptions for potatoes suited to different uses, whether baked, boiled, sautéed or cut up into wedges – or even a combination of these. Some varieties offer good resistance to common diseases including blight, which can ruin a crop in warm, wet summers. Or grow first earlies, which are usually harvested before the main blight risk.

Mr Fothergill's stocks a range of seed potatoes as part of it's Summer Produce range. Stock is available at leading Garden retailers nationwide from late April til September (contact your local store for stock availability), with limited stock available online from June through to September. The range includes popular varieties such as: Desiree, Dutch Cream, Coliban, Pontiac, Sebago, Kipfler, Nicola, and Ruby Lou, as well and a number of more unique varieties. Check the description on each variety to find out what they're best used for.

You may have seen old potatoes grow shoots out of their "eyes", this is how new potatoes form. You can either plant seed potatoes whole, or cut them up into pieces with at least 2 eyes per piece, air dry cut potatoes for a day before planting.

In regions where Spring’s arrival is a little slower to arrive it’s worth sprouting or ‘chitting’ your seed potatoes. Do this up to six weeks ahead of planting, to give your crop a head start. Lay them out in a single layer, so the ends with most eyes – that’s the dimples where the shoots will sprout from – face up. Place them into trays or old egg cartons, which hold the potatoes steady. Keep them in a cool, bright place to sprout thick, sturdy shoots. 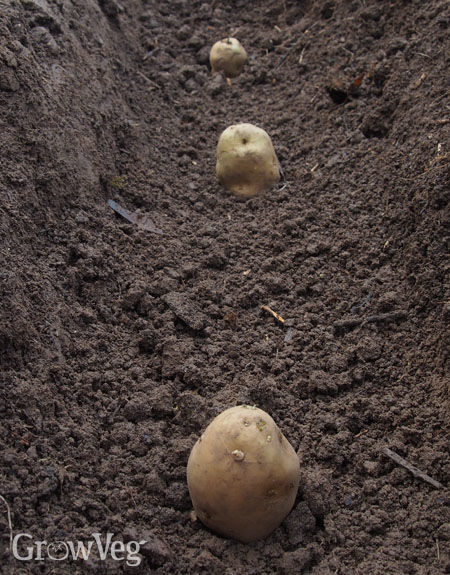 Potatoes love rich, moist soil that’s been gradually improved with organic matter such as well-rotted compost or manure. Avoid poorly draining soil to prevent tubers from rotting. A sunny spot on the plot will encourage the strong growth you’re after. They also grow well in pots, or in specially made potato bags which make harvesting easier.

Potatoes do not handle frosts well and require 60-90 days of frost free weather to be successful, so they are best planted in most of Australia after the last frost of the season. You can use our Garden Planner to check the best times to plant in your area, based on data from your local nearest weather station. The Planner is also a great resource for browsing variety descriptions and, of course, to lay out potatoes on your plan so you’ll know exactly how many seed potatoes you’ll need to fill the area you have. We also have a mobile app you can take into the garden with you.

Once they reach 15cm tall begin earthing up your potatoes. Earthing up mounds the soil along the row to encourage more tubers to grow and to reduce the risk of light exposure, which turns the potatoes green. Use a hoe to draw up the surrounding soil around the shoots, leaving the very tops exposed. Earth up in stages like this each time the foliage reaches a similar height above soil level, and continue till the mounds are either 30cm tall or the foliage above has closed over.

Remove weeds as they appear, there won;t be many as fast-growing potatoes soon crowd out any competition. Potatoes need ample moisture for all that growth, so ensure to keep the water up them in dry weather to enable tubers to grow to their full potential, free of any cracks or hollows.

Now comes the fun part. You can harvest tubers small as ‘new’ potatoes as soon as the plants begin to flower a couple of months after planting. Continue harvesting early varieties in stages from this point on, leaving the remaining plants to grow on until needed. This staggered approach to harvesting allows you to enjoy potatoes at their freshest and tastiest.

Maincrop potatoes are usually harvested towards the end of summer or in early autumn once the foliage has died back. Leave the tubers underground for a further two weeks then, on a dry day, lift them up with a fork, taking care not to accidentally pierce any of the tubers. Brush off excess soil, let the potatoes air dry for a few hours then store out of the light in a cool but frost-free place.

Mr Fothergill's stocks a range of seed potatoes as part of it's Summer Produce range. Stock is available at leading Garden retailers nationwide from late April til September (contact your local store for stock availability), with limited stock available online from June through to September.

What is your favorite Magento feature?